Hello again! Sorry it’s been a while since I posted here, but the internet connection available at the Lodge at Thanda is so slow that I can only post a picture to Facebook each day, and even that only works one time in three. WordPress, the platform I’m using for this blog, requires a connection that is a bit more robust. Besides, as you’ll read below, I’ve been a bit busy these last few days!

Today is Saturday, and I and ten other volunteers are enjoying a couple of days in St. Lucia, a small town on the coast of the Indian Ocean. Obviously I found a place with a better internet connection. That’s the good news. The more challenging news is that, because of a severe shortage, water is off most hours of the day.

Anyway, I have been posting some photos on Facebook as I mentioned. Here a few others (and I hope I haven’t repeated myself).

I don’t have a photo really worth sharing from Monday, so I’ll start with this from Tuesday. As part of the photographic workshop we are being challenged to capture movement in our wildlife photos. This would have been better with a front hoof off the ground, but I do like the tail waving in the wind.

I took this photo on the same drive. I like the how the shadows play with the zebra’s stripes. By the way, everyone here calls them “zeh-bras” instead of “zee-bras” like we do. So when I get back and start talking about the animals, listen carefully to hear if I’m using the American pronunciation!

On Thursday we headed out at 6 am, and our first stop was a watering hole at Mduna. Thanda is a private reserve that has entered into an agreement with a local Zulu king to lease Mduna, the adjacent property. For now, these two large reserves are separated by fences, though the hope is that eventually the fences can be removed, leaving a much larger space for all the various animals.

While parked at the watering hole (an artificially created body of water), we saw numerous birds and antelope all sharing the water. On the way in we passed by a herd of wildebeest. After about an half hour their thirst apparently overcame their fear (or concern) about us, and they passed within feet of our truck, allowing me to grab this photo.

Later that morning we went to another watering hole, one that has been monopolized by the Mduna lions. Here we see two of the lionesses interacting. I also have photos of lions yawning; these are quite dramatic as it looks like the lion is roaring! But I really liked the action and the expressions here. Lions seem quite noble, though this pride has been irritating our guides. In the course of two days they killed first a young wildebeest and the next day a full-grown zebra. But, as they were already gorged from a prior kill, the lions left these poor animals simply to attract flies and decay. But when a bird showed some interest, one of the lions got up to protect her property. Our guides are are NOT happy with these lions!

On an afternoon drive that same day we saw one of the lions start to pursue a small bushbuck antelope. While it would have been exciting to see a lion kill, especially within a hundred yards of where we parked, I’m glad the lion didn’t kill, especially when they were no longer killing for food but rather for sport. 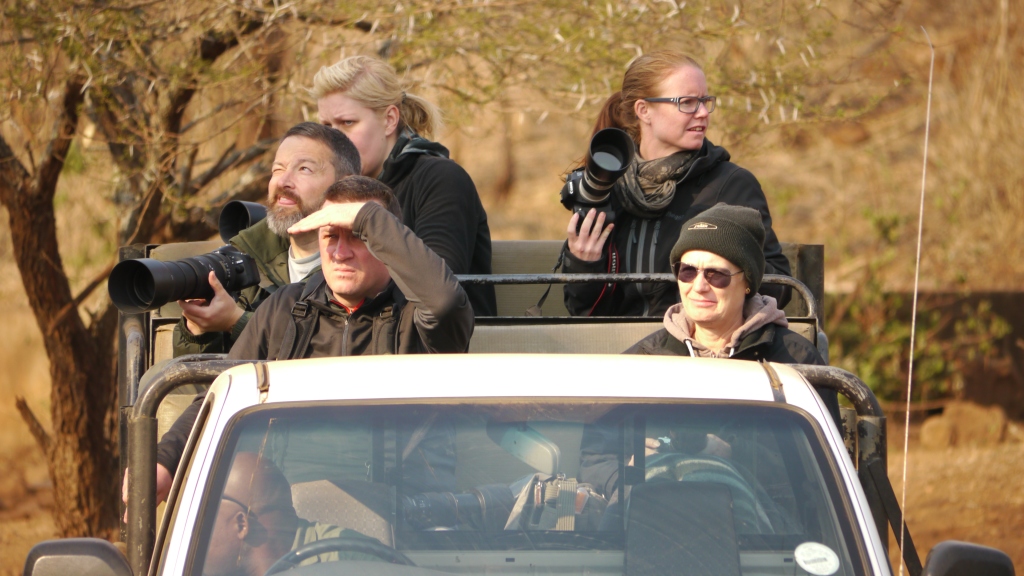 This was taken during that same drive. Who knows what I was looking at! Behind me are two ladies from Sweden, Maya and Emily. In front is Alex, from Germany, and Julie, the photographic coordinator, here from England. Sinda, our guide, is seated in front. Five other photographers are also here.

We just completed a long week that included a great deal of instruction and feedback on photography, and I hope I’ve learned a lot. I certainly need to! The days were sometimes quite long. On Wednesday, for example, we started with a game drive at 6 am and finished reviewing and critiquing photos just after 10 pm. Whew!

Next week our schedule should be a little easier, and we’ll be going on two game drives each day. The photographers will also be preparing and presenting a 90-minute lesson for local kids who are coming to the Lodge at Thanda. I’m very much looking forward to spending some time with the children; those who already have found the experience nothing short of wonderful and delightful.

Speaking of wonderful and delightful, the people I’ve met at Thanda are both. In addition to the nine photographers currently at Thanda, there are also community and research volunteers, from as young as 19 to as old as 60. My roommate at Thanda is a kind and gentle fellow from Holland. This weekend I’m sharing a room with a 19-year-old who is spending two weeks in South Africa as a research volunteer.

I mentioned Sinda, one of our guides. We’ve also had Aly, a young woman originally from England. I am most impressed how these guides can tell where the animals are. They’ll be driving along, then point to one side and announce an animal or herd. Usually we then have to look and look and look before finally seeing what the guide first saw so easily. They will also stop and lean out of the truck to read animal tracks that to us seem to be nothing. Or they’ll stop the truck, turn off the engine, and just listen. Sometimes they rely on a smell — or even just a sense beyond normal senses. Their ability to read and understand signs is, to me at least, a marvel.

Next week some of us are planning a weekend trip to Mozambique. If I can find a place with a decent internet connection, I will post “Week Two” photos. Otherwise, I will continue to post as I can to Facebook. The following week we’ll have a four-day trip to the Drakensberg, one of the post scenic areas in all of South Africa.

One last photo, taken on Thursday. Made me think a bit of stained glass, which reminded me also of my Saint Mary’s family, without whom this amazing adventure would never have been possible. Thank you all!

The Rev. Gary J. Meade is an Episcopal priest currently serving as the rector of Saint Mary's Episcopal Church in Dyersburg, Tennessee. This blog will host photos and reflections from Gary's sabbatical from September through December, 2019. (Dig deeper and you'll find material from his first sabbatical in 2014.) View all posts by Gary Meade